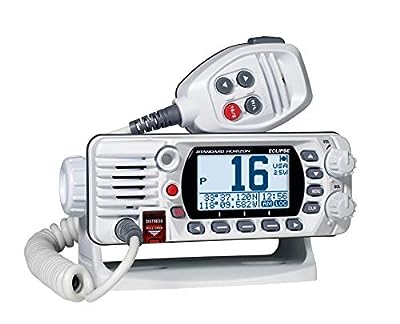 Price: $265.15
As of 2022-08-03 02:17:37 UTC (more info)
Product prices and availability are accurate as of 2022-08-03 02:17:37 UTC and are subject to change. Any price and availability information displayed on https://www.amazon.com/ at the time of purchase will apply to the purchase of this product.
Availability: Not Available Discontinued
Buy Now from Amazon
Product Information (more info)
CERTAIN CONTENT THAT APPEARS ON THIS SITE COMES FROM AMAZON SERVICES LLC. THIS CONTENT IS PROVIDED 'AS IS' AND IS SUBJECT TO CHANGE OR REMOVAL AT ANY TIME.

The GX1400G makes DSC easy. With an internal 66 Channel GPS built into the front panel, there is no need to hassle with wiring the radio to a GPS for DSC. Out of the box and ready to go, DSC calling, position sharing, waypoint navigation, navigation to DSC distress calls can all be performed with just a few simple steps. The GX1400 Eclipse Series is an ITU-R M493-13 Class D class VHF with a separate Channel 70 receiver, which allows DSC calls to be received even when listening to communications. The DSC DISTRESS function when activated transmits a digital MAYDAY including vessel identification, Latitude / Longitude and time (with GPS connected), to facilitate prompt response. Additional calls that can be made are Individual, Urgency, Safety, Position Report and Send. High resolution dot matrix display makes navigating the radios many features smooth and easy. Now with a new brighter backlight for better display contrast. Redesigned with the operator in mind, the new Easy to Operate menu system is now more intuitive than ever. Access all the menu functions and settings with just a few simple steps. DSC calling and DSC programming has never been easier. If your Eclipse Series radio fails for any reason (including water damage) during normal use for the first 3 years of ownership, STANDARD HORIZON will repair or replace it free, without hassles or charges. If it fails for anytime thereafter in normal use, for as long as the original purchaser owns the radio, STANDARD Horizon's Lifetime Flat Rate and Customer Loyalty Service Programs will cover it. Replaces older Eclipse+ and Eclipse DSC Models. Radio controls on the Microphone. Built in Separate Receiver for CH70 (Receiving DSC Calls). DSC test call and Auto DSC channel change selection. GPS position and Time Shown on Display when Connected to a GPS Receiver. NMEA In and Output Connections to a Compatible GPS Chart Plotter. Automatically poll the GPS position of up to 4 ships using DSC. Submersible IPX8 waterproof rating (1.5M or 4.92 ft for 30 minutes). Read Description Below for Details

There are no customer reviews yet. Be the first to Write a Review!

Cookies help us deliver our services. By using our services, you agree to our use of cookies. Learn More Accept